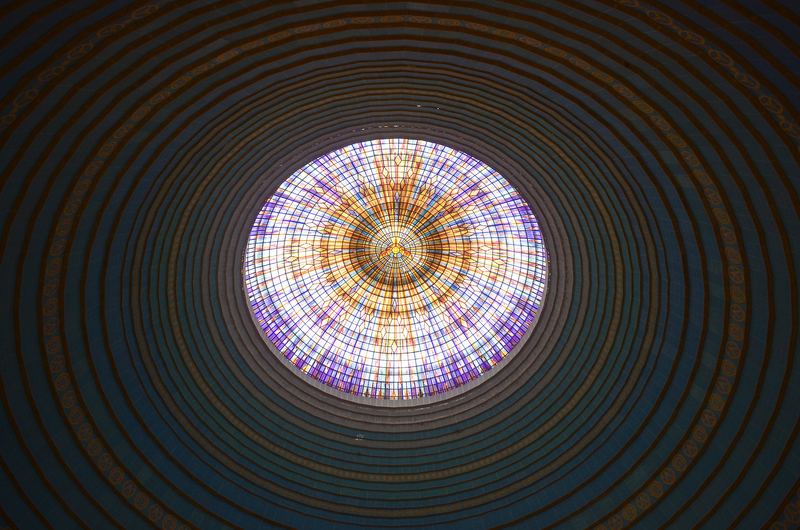 Out of Chaos, Creation!   September 20, 2020, Season of Creation 2 by Rev. Dr. Kristin Philipson   It’s good to be back with you and sharing a message.  It’s been a long time; I was on holiday and then I deliberately didn’t sign myself up to preach right away once I was back because I knew that my life would feel a bit chaotic – I have three kids and the first few weeks of September can feel a bit chaotic at the best of times.  And these are not the best of times.  This September feels more chaotic than a normal September.  Normally my biggest struggle (and a lot of peoples’ biggest struggle) in September is with going back to routines after having a little freedom from routines in the summer.  And normally that is challenging enough.  This September the return to school and work and programs (and for us here at church, the return to some in-person programming) is happening in the midst of a global pandemic.  This September we are figuring out how to go back, how to return to being together again en masse at a time when the human species is besieged by a highly infectious virus that spreads through close contact between people.  The past few weeks have felt chaotic, to say the least, as all of us figure out how to go back to some of our normal activities while keeping ourselves and others safe.

But the sense of chaos we’re feeling extends beyond the personal challenges of resuming school and in-person activities.  At the first fall session of our “Lectio Divina” group – that’s Latin for “Bible Study,” it means “reading for the Divine”  – we looked at the scripture passage we read just now.  “In the beginning, when God created the heavens and the earth, the earth was a formless void and darkness covered the face of the deep.”  “That’s just exactly what the world feels like right now,” everyone in attendance remarked; formless, unhinged, decentered, unpredictable – chaotic.  As a global community it seems we have no precedent for the challenges we are experiencing all at once.  We talked about how nature has been sending out a daily SOS, with wildfires in the western US and in the Amazon, and this pandemic itself a corollary of human encroachment into wilderness.  We talked about how the privileged among us can no longer ignore the continued prevalence of racial injustice and economic disparity.  We talked about the political division and unrest in the US – a country with which many of us are deeply connected, where so many of us have studied, worked, and lived.  We have family there, friends there.  It was the consensus of that Lectio Divina group that chaos seems to abound, the world over, “yes,” we said, “the earth feels like a formless void right now.”  And we don’t know what the next 24 hours will bring, let alone the next week or the next month.             This feeling is exactly why I wanted to work with the reading from Genesis today, even though it isn’t the assigned reading.  I wanted to go back to the very beginning of the story of our faith because it contains wisdom and a proclamation that I want you to remember and hold on to right now, perspective that we all really need to hear.  The story of creation is a story about new beginnings, about what goes into making new beginnings; the ingredients with which God worked.  In the beginning, the story goes, when God created the heavens and the earth, God created that new beginning, that fresh start – that order – out of chaos.  When God created, the story goes, the very material that went into creating Creation, was chaos.  The earth was a formless void and darkness – the impenetrability of unknowing, the unsettledness of unpredictability – darkness covered the face of the deep.  A new beginning didn’t just appear out of the blue; a new beginning didn’t just spring up out of nowhere, the beginning that was the begun in the story of creation – the turning point, the fresh start, the new chapter – that beginning was begun in chaos.  In the beginning the earth was a formless void, a soup – unsettled, deep and churning – and it was over all that chaos, that watery expanse, unpredictable and unstable, that the Spirit of God was moving, hovering, brooding.  In the beginning when God created, God called order out of chaos and it was good.

The Hebrew story of creation was first written down in a chaotic and unsettled time in the people of Israel’s own history, during the centuries when they had been subject to invasion, deportation, and rule by the Babylonian and Persian Empires.  The story was a proclamation of what they held to be deeply and personally true: that chaos is not the end of things but the very material out of which the Divine Presence creates all things new.  It was a story the people told and retold not to comfort themselves with a fairy tale, but in order to recall a deep and intuitive truth: chaos is not only the unravelling of all things, but the weaving together of a new beginning.  In a chaotic and unsettled time, when the people of Israel had been besieged, uprooted from their normal, navigating unfamiliar territory – the chaos of the unknown and unknowable – what they found within themselves was not that they’d reached the end, but a new beginning, new capacity, new life.

I want you to think back in your own experience to a time of personal upheaval, chaos.  When life as you’d known it suddenly wasn’t anymore, as though the ground on which you’d been used to standing became suddenly liquid and unstable, formless.  It should have been too much to handle, all that you were going through and maybe friends and family said as much, “we don’t know how you’re getting though each day…we don’t know how you’re managing.”  It certainly didn’t happen overnight, what was next for you, but looking back it is amazing, the extent of your capacity, the occasions to which you could rise, your strength even in a time of weakness, a new order, a new beginning emerged from chaos.  You couldn’t see it at the time, you can see it, how you were called out of chaos, how you were being led into something new.

Today I want to share with you the hope this story of our faith encourages in us, the courage it fosters, even when all is unsettled, even in the face of the unpredictable.  I want to remind you today of what you already know, deeply, intuitively, that out of chaos Divine Presence calls new creation.  As people of faith, in those times when we have been surprised by our capacity, in those moments when we’re suddenly aware that we have done it, that we’ve turned a page, that we are not where we used to be, that we are at the beginning of something new, we are compelled to proclamation – God has created and is creating.

In the beginning when God created the heavens and the earth, when the earth was a formless void – chaos – and darkness covered the face of the deep a wind from God – the Holy Spirit, like a great bird hovering – swept over the face of the water.  Even now a new world is begun.