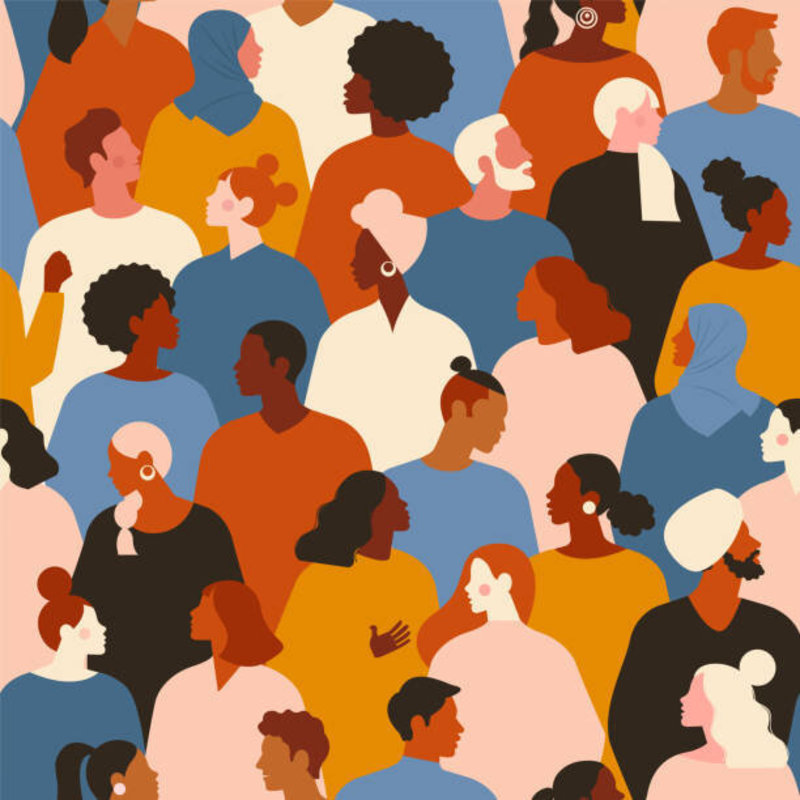 Acknowledging the Trauma of the Past

Here’s a bold statement and I wonder what you make of it: Like it or not, as we make our way through the present we cannot help but be guided by the trauma of our past.  Does that ring true for you?  Perhaps it makes the present sound too fatalistic and the past too much like a ball and chain to which we’re forever tethered.  The importance of acknowledging the past and particularly its trauma is the premise of a book I’ve been reading this week by an author, artist, and psychotherapist named Resmaa Menakem.  It’s called My Grandmother’s Hands.  Menakem cautions that “trauma can spread from one body to another, like a contagious disease – through families, from generation to generation.”

In this second week of Lent, the second week in our “Courageous Conversations” series, we’re talking about how the racial tensions of our present have their origin in the racial traumas of our past.  The title of Resmaa Menakem’s book comes from his observations of his grandmother’s hands.  Resmaa Menakem is African American and his grandmother’s parents were sharecroppers.  When she was just four years old she was already working in the fields picking cotton in order to help her family make ends meet.  Her hands grew unusual callouses and padding, an adaptation to being cut so many times by the thorns on the cotton bushes.  Her formative experiences shaped her perception of the world, and how she moved through it, in her body, how other people reacted to her body.  This same mindset and formative experience and the feeling of how people reacted to her body influenced how she raised her children, the stories she told and later, how they raised their children, and the stories they told.  What is experienced in the body can’t help but pass down through the generations to other bodies, Resmaa Menakem explains.  This is especially true, the book charts, when it comes to experiences of racism.  Menakem writes, “when one unsettled body encounters another unsettled body, the unsettledness tends to compound in both bodies.”  The oppression, injustice, and fear that was experienced or perpetuated by our ancestors in the past, continues to show up in the deep, core emotions we feel in our bodies in the present.

“White-body supremacy doesn’t just live in our thinking brains,” Menakem writes.  “It lives and breathes in our bodies,” he says.  White bodies have been taught generation after generation to see themselves as fragile and vulnerable, Menakem explains.  White bodies, he says, see “black bodies as dangerous and needing to be controlled,” he writes.  Black bodies see white bodies “as privileged, controlling, and dangerous,” he writes.  The mere presence of a body we deem “strange” to us or “foreign” or somehow “not like us” can trigger emotions that activate our “soul” nerve, as Menakem calls it, our vagus nerve, the “lizard brain” that controls our most primal bodily responses: rest, fight, flee, freeze.  Menakem sees the bodily reactions of law enforcement officers in the United States, for example, as terrifying illustrations of the power of the generational trauma of white-body supremacy.  Their knee-jerk reactions to the very sight of a black body is an emotional fight or flight response to generations and generations of stories and culture that has taught that black bodies are always threatening, dangerous, suspicious, and out of place.  Healing from the persistence of racism and white-body supremacy in our present starts with acknowledging the history and the stories we carry about the bodies we see as “other.”

A few years ago I was on a flight back to Toronto from London, England, where I’d gone to visit my brother.  About halfway through the flight, when the little yellow plane icon on the radar map showed us to be right over the vast middle of the Atlantic, I looked up from my book to see five men standing at various distances apart in the aisle.  The men all had brown skin tone and were wearing clothing that identified them as Muslim.  Immediately I felt my whole body freeze, even the hair on my arms felt alert.  I had heard stories about these kinds of bodies; I knew what those bodies meant for me: danger.  Hadn’t I read all the stories in the news?  Hadn’t I seen countless films from the time I was a child in which men who looked just like these men were always the bad guys?  Hadn’t those films and stories been written by people who’d been seen similar films and been told similar stories about these kinds of bodies in their youth?  “So this is how it ends for me,” I thought, “my plane is about to be hijacked by terrorists.”  Just then one of the men noticed me staring at him and he walked up the aisle to my seat.  “Have a look out your window,” he said, “in fact, you might want to stand up, the view is much better.”  I was missing an incredible blue sky and, in the distance, the rare sight of two other passenger planes.  It turns out the men had all stood up to appreciate the beauty, the knee-jerk reaction of the deeply embedded emotions of my lizard brain had told my body otherwise.

To heal racial injustice in the present we need to teach our eyes to see each other’s bodies through a different lens so our brains get a different message.  As a church we need to be conscious of how the images and symbols in our sanctuaries, along with the stories we tell, influence the way in which humanity in all its variety is seen and perceived.  I don’t know if it’s just me, but when I consider our focal stained-glass window, I see racialized bodies represented through a lens that perpetuates stereotype.  Non-white skinned bodies are portrayed as primitive, tribal, diminutive, subdued before a European-looking Christ.  Their outfits betray that they are not “one of us,” that they are “other” and “foreign.”   That racialized people continue to be treated as though they do not belong, even today, is trauma the Spirit wants to help us heal and transform.  It’s time to teach our bodies to react differently to each other.

So far – and I know we’re only two weeks into Lent, but still, so far it’s two for two for me – I am seeing the stories in our scriptures in a way I’ve never seen them before.  I’m finding God present in the stories in ways I hadn’t perceived before.  Last week I realized, for example, that Jesus doesn’t go off to the wilderness alone, it’s God’s Spirit who leads him!  This week I’m seeing that it is the Divine Presence that leads an entire family to heal from the trauma of the past and to walk forward into a new future.  Today we read an excerpt from the story of Abraham and Sarah, originally known as Abram and Sarai.  If you go back and look at Abram’s story you learn that he was one of three sons.  His father’s name was Terah.  Abram was the eldest, then came Nahor, and then Haran.  We often think of the initial incident in Abram’s story is a call from God to go to a new land, but as I reread Abram’s story this week I realized that the initial incident in Abram’s story is, in fact, a traumatic happening, the death of his youngest brother, Haran.  Immediately following his brother’s death, Abram’s father, Terah, takes Abram, along with Abram’s wife, Sarai, and Haran’s orphaned son, and they set out to find a new place to live.  I couldn’t help but wonder if it was grief and trauma that compelled their journey.  Perhaps they were unable to stay in the place that reminded them so much of the one they had lost.  Terah, Abram, Sarai, and Haran’s orphaned son, Lot, set out for a new land, and then they get stuck.  They arrive at a place called – ironically – Haran, the same name as the brother and son they’d lost, and all of a sudden they find they simply can’t continue.  So here is this family literally and metaphorically stuck in the trauma of their past.  This was a detail I’d never noticed before.  Abram’s father “lived 205 years” it says in the Book of Genesis.  In other words, he was “stuck” in his trauma for a long time – the rest of his life, in fact.  Abram’s father dies in Haran, and it’s here, now that Abram is in the depths of the depths, wondering if he can ever escape the trauma of the past that he hears the voice of God.  “The Lord had said to Abram, ‘Leave your country, your people and your father’s household and go to the land I will show you.”  Abram commits to following God’s ways and God commits to the care and keeping of Abram, to transforming what curses him, into what blesses him.  Abram takes a new name, “Abraham,” and his wife becomes, “Sarah” and they begin a long journey, a journey of walking with God and healing the trauma of the past.  It’s interesting that one of the healing spiritual practices into which God invites Abraham and Sarah, in order to help them overcome the trauma of their past, is the practice of hospitality.  In the chapter that follows our reading they are visited by three strangers.  Abraham and Sarah decide to treat them like family; they invite them to stay, they wash their feet, they offer them food.  It’s one of these strangers who announce to Abraham and Sarah that when he returns the following year, they will have a child.  Out of the traumas of our past God brings healing and transformation – even new life.  We will not stay in this place forever, but are journeying onward, even now, called into a new country by our loving God. 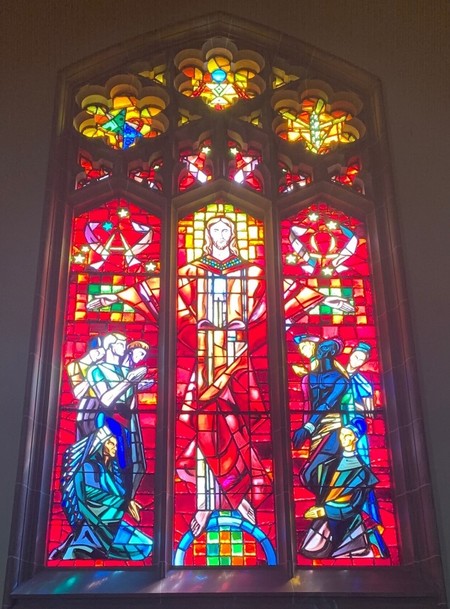