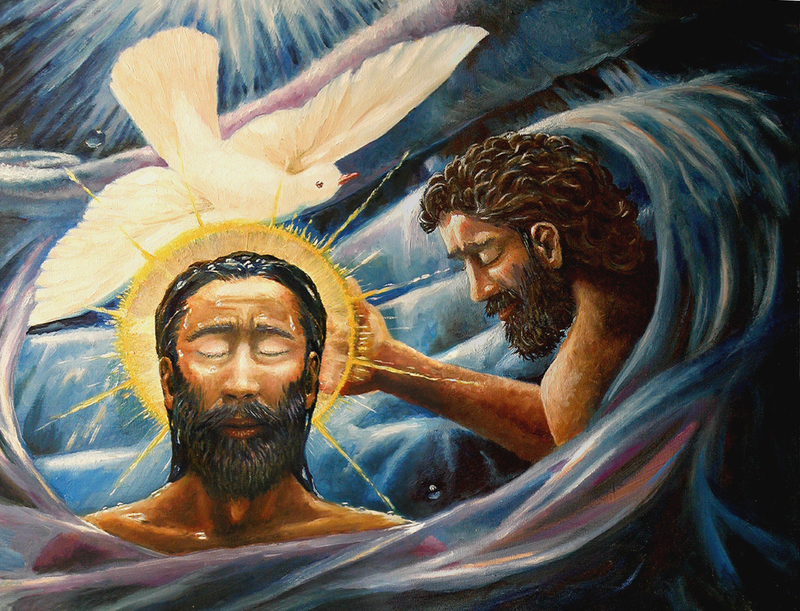 To begin with, I don’t think there was any way I could have preached this Sunday without addressing the event that have taken place in the US this week. I know it is a different country, and that there is little we can do here, but frankly, it would be impossible to ignore it.

On Wednesday, I woke up to get to a 7:30 doctor’s appointment (routine, but way too early in the day). I walked home, stopping at the Freshco for some sugary junk food to get me through this sermon. Ah, I thought, a quiet afternoon to write about how our baptism is a call to be God’s children in the here and now.

Then I, along with millions of Canadians, watched the news as shocking, but unsurprising, violence broke out in DC. And any plans for a peaceful reflection to bring comfort and quiet meditation flew out the window. We watched in horror as hundreds of Trump supporters and insurrectionists stormed the Capitol building, attacked law enforcement officers, brought semi-automatic weapons and zip ties into the most sacred rooms of American democracy. It took hours for the area to be secured, as congresspeople and senators had to be led to saferooms wearing gas masks.

And then, someone raised up a large wooden cross on the lawn. Subtlety was not the strong suit of the violent mob that day. Someone, perhaps many people, decided that they believed Jesus wanted them to storm the building and proclaim that God wanted this to happen. They heard John the Baptist and decided it was a rallying cry for nationalism.

A voice in the wilderness cries out, “Prepare the way for the Lord, his paths straight!” John the Baptist appears, the prophet who has foretold of Jesus’ arrival, and warns us all to prepare for his immediate grand entrance. John takes on the usual pattern of ancient Israelite prophets; he is convinced he hears the word of God, the calling of the Great Creator. He uses rituals to cleanse himself, including surviving for days in the woods on only what exists in nature. And he tells everyone and anyone that will stand still long enough to get ready, for the Big Thing is coming. Honestly, the most shocking thing for me is that people follow him! Would you follow a random guy who is covered in camel hair, with bugs in his teeth and clearly no idea how he looks, who tells you that you need to cleanse yourself of sins by confessing them, as he dunks you in a nearby river? Yeah, didn’t think so. My mother taught me to avoid strangers offering to take me into bodies of water, and that sense of self-perseverance would probably override this weird man and his proclamations.

Regardless, he makes it clear to all; Jesus is coming. Get busy. Prepare yourselves, because The Messiah, the King of Kings, the True Prince of Peace is on his way. Make paths straight for him! Make paths straight? Prepare? What are you talking about John? It feels like he is telling us that we need to put out a pot of tea and some sandwiches, but the whole house is in flames. How on earth are we to prepare for the one who brings love and compassion when so many are just focused on survival? When we look at the wooden crosses on the lawn, or the bullet holes in the glass, or the cuts on the faces of passersby?

And before we forget, there is a great number of crooked paths that need straightening out here, as well. That same day, there was a massive pro-fascism rally past the US consulate. Not 3 months ago settlers attacked Mi'kmaq lobster traps and fisheries. There have been multiple explicit attempts to attack government officials, non-profits, and activists from nationalists over the years. The founder of the Proud Boys, one of the largest nationalist organizations and let’s be honest, a Neo-Nazi wearing a different uniform, was raised near Ottawa and went to Carlton. Not to mention the thousands of attacks that happen on people in Canada because of their race, gender, LGBTQ identity, or disability. There is a lot of hatred in the fabric of our land, not just a stain that we need to remove, but sewn in to the tapestry, and needs to be plucked out with a seam ripper.

It is more than enough to make us stare in abject horror and anger, confusion, and sadness, as we realize that our sins will take generations to confess, and even longer to straighten out the paths. Meanwhile, the house still burns. How do we even begin preparing for Jesus with all of this stacked up against us?

I think we begin here, and now. We begin by the waters, the healing waters of our baptism. The same ones that John used to baptise Jesus, where dozens before him were cleansed of their sins, and millions upon millions have made their covenant with God afterwards. Perhaps including you. And including me. Because those waters aren’t just a random ritual, a symbol of washing ourselves of our sins. They are the ultimate reminder that we aren’t doing this alone. We can’t do this alone, so we won’t.

“The one who is more powerful than I is coming after me; I am not worthy to stoop down and untie the thong of his sandals. I have baptized you with water; but he will baptize you with the Holy Spirit.” Yeah, it is Jesus. The answer is always Jesus. The one who understands that the house is on fire, that violence, nationalism, racism, and despair are around the corner. The one who looks at each and every one of us and says “Your burden is heavy, so let me carry it for you.” The one who says “You only have one job to do; love your neighbour. It is that simple.” The one who will be killed in state-sanctioned violence, only to defeat death for us all, and to lead us into the New Kingdom of Heaven.

The tyranny of King Herod, the legacy of cruelty and violence, the damage of a society that oppresses the marginalized will only stay present if we, as a society, let it. There are hundreds, thousands, of people leading the way to peace, through marching, writing, singing, governing, and celebrating the good and amazing things that humans are able to do. They have heard John call for us to prepare, and said “we best get busy”. And so we as a society are also talking about reconciliation, racial justice, disability advocacy, an end to gender-based violence. These are the building stones of God’s kingdom. Not crosses on the lawn, but the persistent defiance of a community that resists letting evil win. Pebble by pebble, brick by brick.

Today, we celebrate the baptism on Christ, where he is blessed by God, in front of all present. We are reminded of the simple, yet profound covenant, we have made with God; I profess to be loving, and be loved, and know that we are not alone; we live in God’s world. It is that ancient ritual that connects us to generations of other broken but hopeful believers, doing what they can to bring for God’s kingdom for us all. Stone by stone, act of kindness by act of kindness, teacup by teacup, we establish the true kingdom. Where we are not connected by who we hate, but by who loves us. The paths ahead of us a mightily crooked. But we are slowly able to make them straight. To move us towards the end of suffering and the beginning of healing. It will take every one of us remembering our call to be God’s children, and bringing forth peace. But we don’t just have a teacup this time. We have the river, flowing unceasingly, with God’s love. Amen.