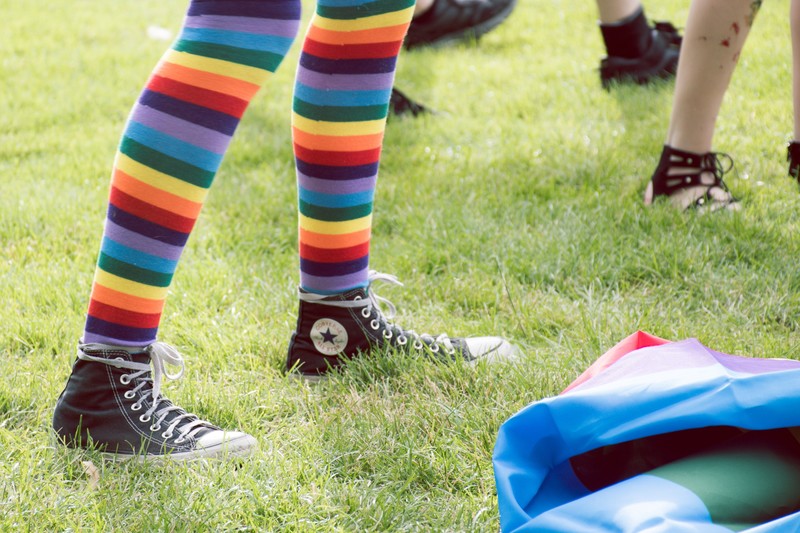 Before we go any further, a brief note for today’s programming. One: I am an openly queer woman in an Affirming congregation. If you didn’t know this, please subscribe to our newsletter because I have been wearing Pride t-shirts for the past month. And two: throughout my sermon I may shorten the community’s name to the Queer community. Not everyone calls themselves Queer, but with love to my rainbow siblings, we don’t have 4 hours for me to repeat “Lesbian, Gay, Bi, Trans, Queer, Intersex, Asexual, Two-Spirited, plus”. I beg your forgiveness, and please substitute as needed.

One of the phrases I use over and over for Pride Month is “Made in God’s Image”. It is painted on my soul. A couple of years ago, the United Church of Canada’s theme for Toronto Pride was “Made in God’s Image”. They had a large cardboard cutout of an Instagram picture frame. They would let people in the crowd pose with that cutout, so that we had hundreds of pictures of people of all backgrounds and identities, with the caption MADE IN GOD’S IMAGE on the bottom.

I asked one of the leaders about it, what it was like to see all these people using this parade prop. She looked at me with tears in her eyes and said: “way too many said they were never told they were made in God’s image. They were never allowed to imagine that”.

To never be allowed to imagine you are made in God’s image. It is a reality for millions across the world. And I feel we need to sit there for a bit today.

I want us to imagine God for a minute: Don’t think about it too hard, just find the first picture that hits your mind and hold on to it. What does God look like? Sound like? Many have been taught that God is, quite frankly, an older, white, able-bodied man. No sexuality, but everything about this God is presented as straight. God is closer to Zeus than, for example, a young Jamaican lesbian. This has been the way for centuries. Sermons dating back millennia have made it clear: God is bigger and more powerful and more amazing than your tiny mortal brain could possibly understand: but God is a White, Able-Bodied Man.

When was the last time you saw an image of God (or Jesus, for that matter), that looked like you? That you could easily say “hey, that looks familiar?”. For me, it has been a while. And as much as I love this sanctuary, I don’t see it in our stained-glass windows.

“We are all made in God’s image!” I hear some shout across the internet. And therein lies the problem. If all we ever really see, in movies, television, books, churches, streets, and our own ideas is God as one particular race, gender, body-type or image, it becomes easier to ignore the image of God that isn’t in our stained glass.

This isn’t an exaggeration. Thomas Aquinas, a 13th Century writer, decided that women were defective men, a failure. We aren’t an abomination, but we may not have souls at all. Women could be best described as off-brand men.

In the 1400’s where the Catholic Church’s Doctrine of Discovery decided that the Indigenous populations were inferior, potentially soulless beings, and should be either converted, exploited, or outright exterminated. The effects still ring through today, when Canadian law and culture treats First Nations, Metis, and Inuit as simply inferior to the rest of Canadian society. And let’s not forget that in 1787, US Congress literally declared Black enslaved people as 3/5 of a whole white person. And the results of that worldview are still being seen today. And I could spend hours talking about how we have viewed people with disabilities as non-persons. But that is another sermon.

This makes its way to the Queer community. A community that for centuries has been told that we are inferior. We are mentally ill, an abomination, the embodiment of sin. We can’t be made in God’s image, because God would never look like us. And so, the church, the law, society, told us to conform, fit into a closet that felt like a coffin and accept that we are never capable of embodying God’s love.

Pride Month is a recalibration of the system. It is about celebrating the opposite of shame. Of being loud and obnoxious and refusing to go back into that closet, because we are embodiments of God’s love. We are God’s children. We are made in God’s image. Pride is about embodying that future God has for us all, you and me; where we all are the image of God, seeking justice and resisting evil. We are Proud to be made in God’s image; sources of love and hope in the world.

June 2020 may have been a lot for us; I just think about the number of outreach causes and social justice calls and activism movements that we have been working with in the past 30 days: the Black Lives Matter movement, the Queer Community, Indigenous Rights, homelessness and anti-poverty efforts, refugees and people seeking safe harbours. We haven’t even scratched the surface. I imagine we sort of feel like jugglers right now. One ball; say the Queer community, we can manage fairly well; Two, (BLM) a bit of coordination, but we got this; now comes homelessness; don’t forget poverty; don’t drop the ball on refugees; and so on. More and more are added to our juggling routine, and it is getting harder and harder to hold them all aloft. And if one goes, often it means they all fall. So, no pressure.

This means we sometimes treat caring for others as a burden or chore. It is tiring, it is a lot of work! Imagine what God sees while God is juggling all of these balls. Does God see them as burdens and chores?

Or does God see them as billions of gifts in the world? Tiny points of love on this spinning blue ball in space? It isn’t a chore to love people. It isn’t a burden to say Black Lives Matter, that Queer Lives Matter, Refugees matter, Disabled Lives Matter. It is a privilege and gift to be able to look at someone and say “You are made in God’s image”. It is a blessing to be able to work with others and say “we are made in God’s image, capable of love and justice”. The injustices that activists and movements are naming and fighting against are horrific sins in the world; but we are given the chance to do something with the Image of God that is painted on our souls; love, my friends. We work together to juggle everyone and hold everyone close and love everyone fiercely. We will do it, not because it is a burden or punishment. We can do it, because it is a celebration of how important each and every person is. We can do it, because we are made in the image of Love. Amen.